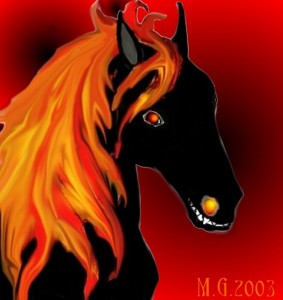 Mielahis is the Multiverse’s most cute dreaded nightmare.
He is part of the awesome little world that Vile and I created in countless emails and if you will sort of an RPG-character, but he surely has a life of his own in my mind.

Mielahis is not your typical nightmare.

He found me in a bad dream and followed me home. Despite everybody around worrying, neither of us killed the other before we had grown into some kind of friendship. When we met he was very young and obviously kinda deranged -what exactly happened in his earlier life, we have not discovered yet. Growing up some, his behaviour grew less unpredictable, too, as he learned to control his urges to chase and fight and by now he is happily installed in his „herd“ of friends around him and has grown up to a formidable specimen of his kind. His friendliness toward other species remains an oddity for his kind, though.The greatest weakness he developed while living at the Ivorytower, is a great addiction to fresh (chocolate) muffins.
He is not to be underestimated for his social skills, though- if need be, he is just as recklessly savage and ferocious as any other nightmare would be. 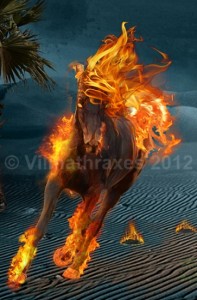 His image gallery you find here: Mielahis‘ Gallery
(And yes, about time that he gets a new drawing…)

Mielahis: About bloody time that I get my page- they have been promising me one for *ages* – and nothing happened. I have had enough. Good for Ailanreanter that she could make the code to include me so quickly…
So here on this page, you can read all what truly matters in the multiverse *cough* things related to me.

This means that Mielahis is occasionally blogging, too, but he is fairly lazy on that behalf. Still, you might find som interesting new sides to him, when you check out his posts. You can find them all here: Mielahis‘ Posts