>…have overrun my Dendrobium. *grouses* (Funny how one reads retrospectively that those are sensitive to this kind of problem, isn’t it?) Since it does get water every two weeks unlike the others, the big inspections were also further apart – which was apparently enough time for the little buggers.
What made me suspicous?
Some creepy-crawly activity on my miniature white Phalaenopsis a week ago (which was localised to one bud) which resulted in separation after killing the spot of problem by removing the part of the plant (stalk part) and using mild desinfectant on the other soft and new spots. (Brutal, I know, but this is a hybrid, so it will not die from such things. *g*)
After this, my attention was a bit more sharpened, but still my eyes were more on the Phals – until I ogled the plants one evening and wondered about silvery white „chalkspots“ on the Dendrobium, since I do not spray my plants. Examining under full light revealed that the silvery shading had spread far all over the plant. Short internet research confirmed my worries- spider mites, hooray.
I also read of someone doing successfully the kinda radical bath-method with their dendrobium – so I decided to try it, too, much better than waiting until I finally find a pesticide in the shops.
So unpotting followed and a showering with warm water to wash off any mobile visitors and then off into the bucket!

The greenery in there is the plant. The water has a generous addition of washing-up liquid and a small dose of Sterillium added. (The sterillium is a disinfectant based on alcohol- try first if your plants don’t react to that or it might kill them! For just drowning the mites, the washing up liquid is sufficient.)
At about twelve hours, I showered the plant again and set up new water-solution, this time only with washing-up liquid.

Twentyfour hours later, the plant was rescued from the bucket and thoroughly showered, especially the roots. And then potted for the night. 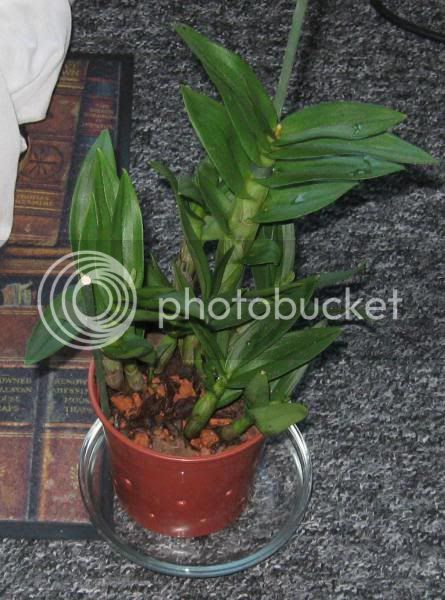 Closer inspection in daylight did reveal massive damage on the undersides of the leaves:

And in some spots, the plant had not taken well to being wet for so long.

Since it has many bulbs, I decided to risk a parting of the plant. The youngest offshots did look best for some reason, less damage to the leaves and lots of good roots, so they got settled into one quickly-made pot.
Only one of the big parts of the plant looked as if it might make it, but the roots are not so good on this part, so we well see. The prognosis for both pots is guarded, but I hope that at least one of them will make it.